The Evolution of Video Conferencing

From the Picturephone, to legacy video estates to the cloud

Video conferencing is an online meeting between people in different locations using audio and video. It’s a vital method of communication for businesses across all industries, especially those with multiple offices and dispersed staff.

Surprisingly, video conferencing dates back to the sixties, when AT&T introduced the Picturephone at the World’s Fair in New York, 1964. The technology wasn’t used by many at this time, as it was too costly for most, plus it was difficult to use and had poor picture quality. 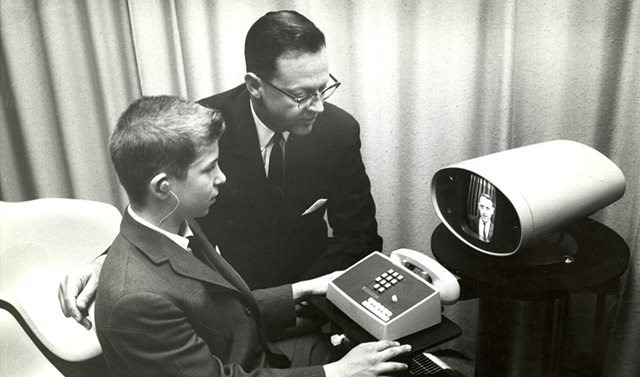 By the 1980s, other companies had started to produce their own video conferencing systems, making the once futuristic technology more mainstream, although they were still expensive and were mainly used by large corporations.

The computer revolution, IP technology, the internet and advancements in video compression technologies saw video conferencing take off in the 90s, and the price of VC systems dropped majorly from the previous decade, with new players in the market developing more affordable systems, such as PicTel by IBM and CU-SeeMe by Macintosh. These systems were commercially-viable for more businesses, making collaboration more of a reality than ever.

The 00’s is when video conferencing became personal, it was no longer restricted to businesses. Skype arrived in 2003, with audio calls, chat messaging and file sharing being available on the platform for free on a desktop PC with internet access, and this developed into video calling in 2006. Skype’s offering to video conferencing was followed by Apple’s FaceTime in 2010, the start of the mobile-era of video calling.

Despite costs being considerably lower than 20th century video conferencing, even during the 00’s companies incurred high costs for their video estate. The hardware was expensive to buy, especially for multiparty conferences as a Multipoint Control Unit was necessary to connect the users, plus this infrastructure is expensive to maintain.

Many companies are still using their legacy video conferencing estate, despite these very high maintenance and upkeep costs. Businesses don’t need to pay all this money to continue using their video estate when there is a simple alternative: the cloud.

Keep your existing video endpoints, but switch over to cloud. This will remove the need for costly support contracts, plus will give you all the features you need, with added extras that you don’t get from traditional video conferencing estates: full Skype for Business interoperability, webRTC, multiparty conferences, easy to use software, mobile apps, and many more.

Involve Cloud is our cloud platform, designed to allow our customers to have business quality conference calls for audio, video and web participants no matter where they are or what equipment they’re using. We want to help businesses save money by refreshing their legacy video conferencing estates with the cloud, so please get in touch to discuss your video estates with one of our specialists.